This is a high quality course that deserves all the accolades that it gets. Always maintained in great condition, great variety, not much that hasn't been said about this course.

Variety of Design: Very good. The par 5s have great variety with two being close to reachable and one requiring two excellent shots to put in position to hit to the green. The par 3s also have solid variety, one being a long iron/hybrid, two with mid/long irons, and one short iron. The par 4s, while good holes, lack variety...they're all either long or longer. Directionally, 4 holes dogleg Right, 3 holes dogleg left, and 7 are straight, excluding par 3s. 7 out of 10

Flow of the Course: While no hole on the Black can be called easy, some are easier than others, some offer the opportunity to score, and some require the player to play conservative. The first two holes are relatively easy, 3 is difficult, 4 gives a birdie chance, 5 is extremely difficult, 6 and 7 offer birdie chances if one hits quality shots, the stretch from 8 to 12 are unrelenting, 13 and 14 offer scoring chances, 15-17 are difficult, and 18 offers a decent scoring chance to close out the round. 8 out of 10

Course Conditioning: Excellent. Fairways and greens are near perfect. 9.5 out of 10

Walkability: Course is walking-only. That said, the walk is not easy. There are some substantial hills, but the green-to-tee transitions are usually short. 6.5 out of 10

Atmosphere: Incredible. Everyone going to the tee feels a bit of anxiety and excitement. 9 out of 10.

This course is quality. I certainly think it's one of best courses designed by Rees Jones. The course has awesome scale, everything is very large. The course is very long, topping out over 7,600 yards from the longest markers (which aren't on the scorecard). This course never goes over the top, which is a criticism I've had of some of the ultra long courses on the RTJ Trail. That said...the lack of an "over-the-top" feature leads to holes very close in yardage. The par 4s range from 400 to 489, but only the lone 400 yard hole is less than 427 yards. The par 5s are also very tight in yardage range, 560, 570, 573, and 612. The par 3s do have decent variety. While I don't know the mandate given to Mr. Jones by the original owners, but it seems to me that greater variety could be obtained by taking two holes that are 489 and 429 and bumping one to 529 and dropping the other to 389; or making 444/427 into 504/367. This way, the total yardage can remain the same but the holes have much more variety in the yardages. Really though, while I have gone on about that for a while, it's not that big a deal. The course still has great feel and atmosphere. Definitely recommend playing here. 6 out of 10.

A look from the tee: 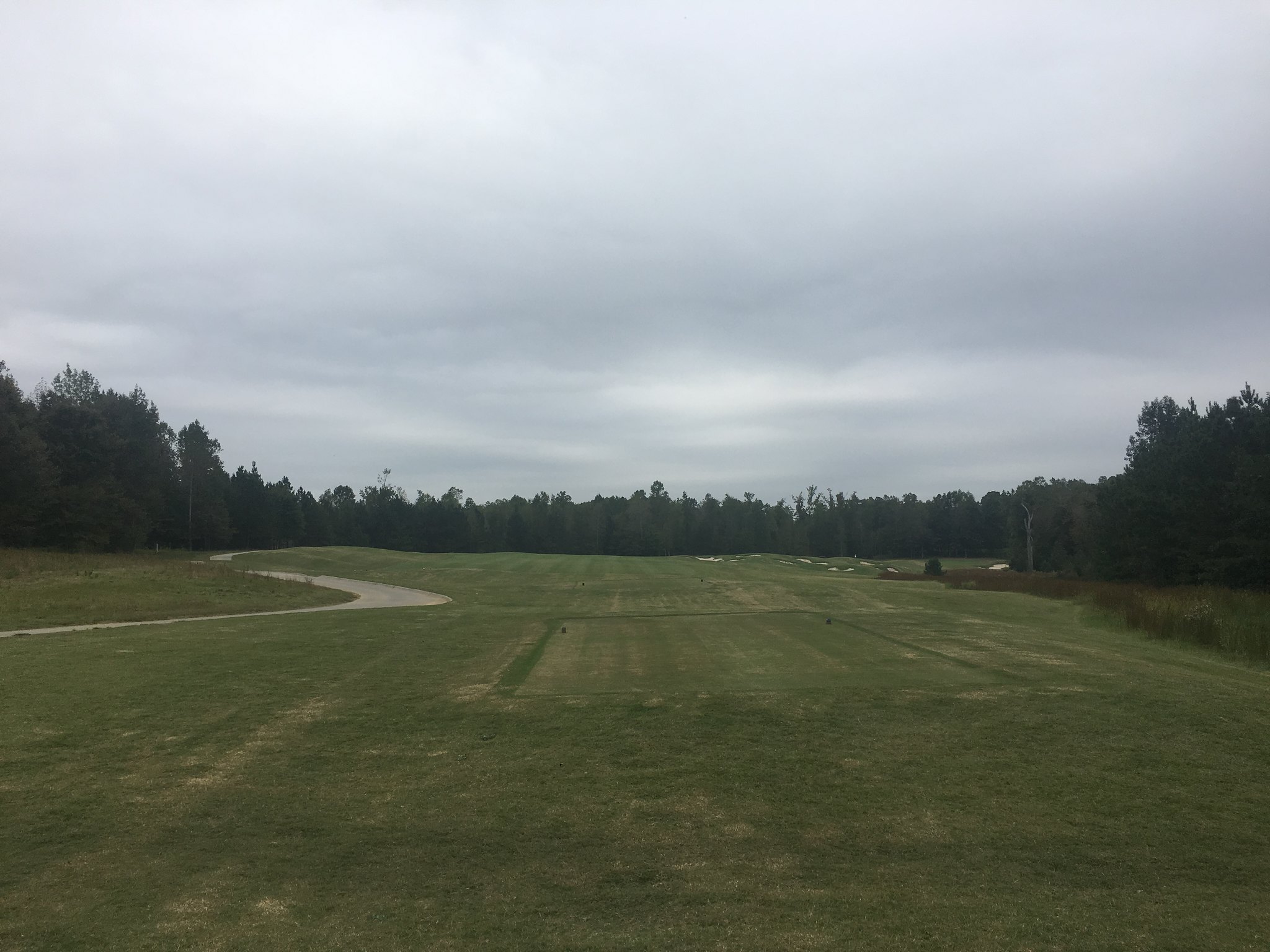 Looking from the fairway towards a green that sits nicely into the hill. 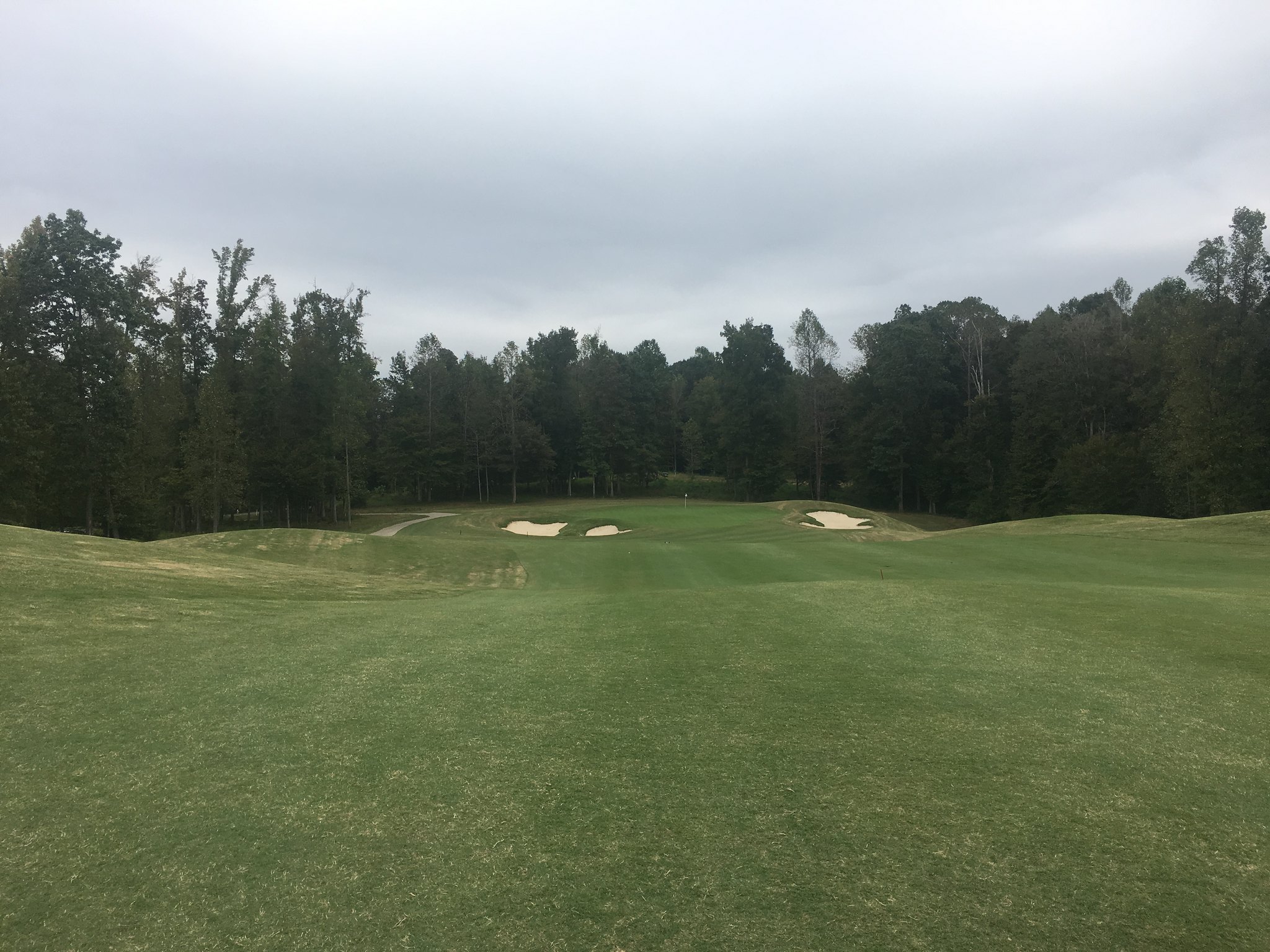 Hole 3: Par 4, 429 yards
This hole requires a great tee shot. There is a severe fall-off down the left side that will penalize anyone who misses there. The green also has a significant fall-off for shots going beyond the green. In my play of the hole, I proved both of these to be the case; this is a quality hole, it certainly doesn't forgive poor shots. 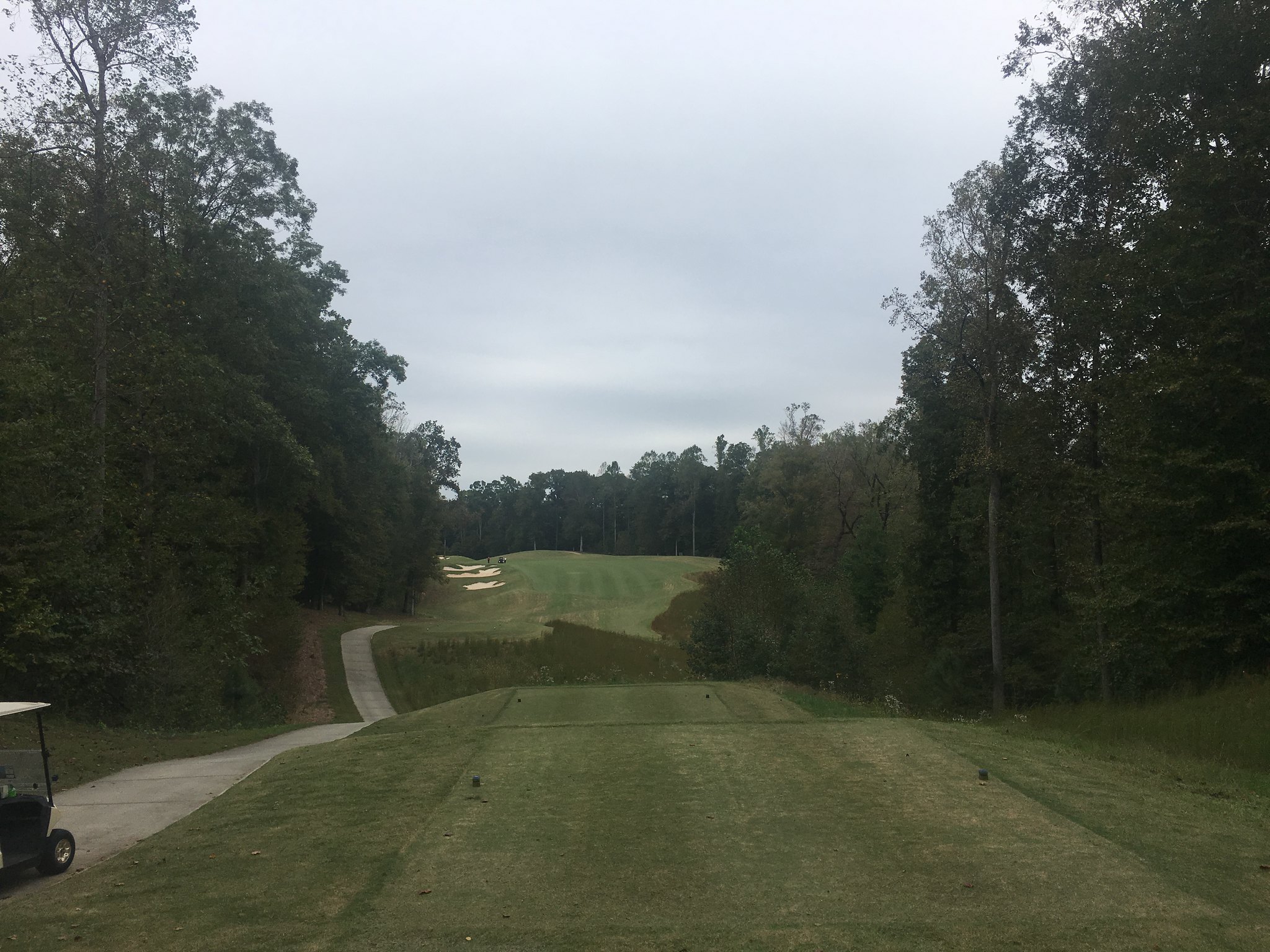 Hole 16: Par 3 167 yards
The best par 3 on the course, in my view, is also the shortest. The front is well defended by a huge bunker and there is a fall off beyond the green. Even though it is short, the hole requires a precise shot in order to make a good score. 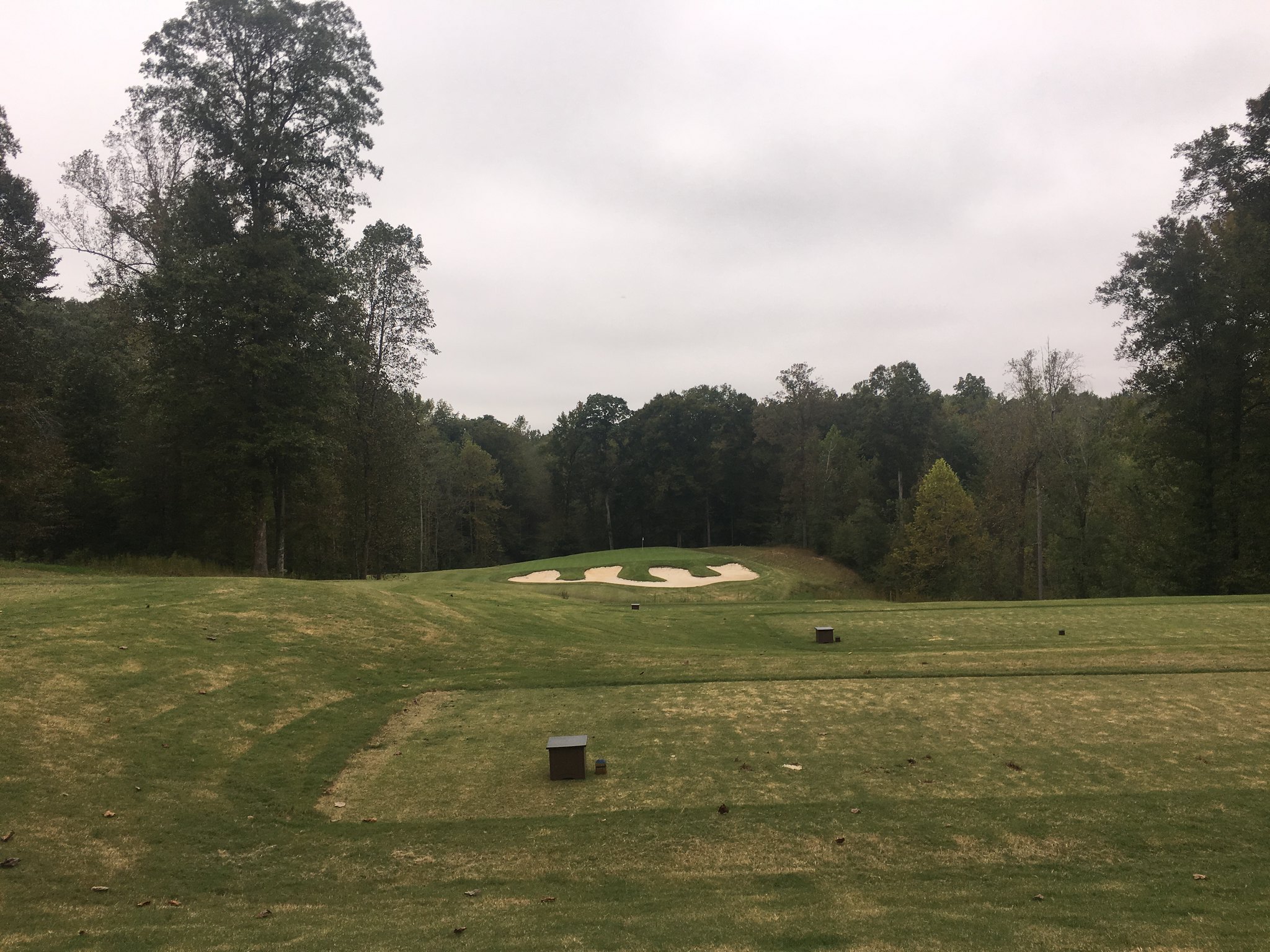 Rating
Variety of Design: Fair. I detailed this above. The par 4s are limited in distance variety with only 89 yards of difference between them. Par 5s are also limited with just 52 yards; also 3 of the 4 dogleg to the right. The par 3s have good variety since two of them have a large number of tee boxes, but for total yardage, only 43 yards difference. For direction, 5 holes dogleg right, 2 dogleg left, and 7 are straight, excluding par 3s. 6 out of 10

Flow of the Course: Very good. The course starts with a relatively easy par 5, goes to a hard par 4, a par 4 that requires a great tee shot, some ups and downs in the middle before a closing 3 hole stretch that can allow for a great finish. 7 out of 10

Course Conditions: Fairways were very, very good. Greens were as good as could be expected given the terrible weather that Virginia experienced during the summer. 7 out of 10

Walkability: Not very good. The course is routed on hill tops with some lowlands in between and would be extremely difficult to walk. 3 out of 10

Atmosphere: The course has a great feel. The overall atmosphere will improve once the new clubhouse is finished. 6 out of 10.

After my tour of Royal New Kent, the Superintendent, Mathieu LeCompte was very gracious with his time and participated in an email interview. I'll add some notes on some questions, anything I write will be noted with [Brackets].

1. How much Green space do you have?

We currently have just over 4 acres of greens which includes a small nursery green that was built at the golf maintenance facility during the greens renovation.

[The new greens are fantastic. In general, the greens here are very large. Some are 70 yards deep, others 60 yards wide. One green is roughly 13,000 square feet by my rough calculations. These are a truly impressive set of greens.]

2. How much Fairway space do you have?

We have roughly 50 acres of fairway.

[Same with the greens, Mike Strantz was known for scale. Some fairways are close to 100 yards wide in certain points.]

3. How many irrigation heads?

There are roughly 1500 irrigation heads on property. (Some of which have not run in quite some time)

4. What was the condition of the irrigation system when you took over in June? How much work has been done since then?

My first day on the job was spent replacing 20’ of a 12” main irrigation line with Willie [Downs, the site foreman] and a fellow Superintendent from down the road.  Things could only go up from there I suppose.  We have seen the typical pipe breaks and control issues of a 20 year old system but the club is scheduled to upgrade our central irrigation computer, satellite controllers, and several irrigation heads this fall.  That will greatly reduce many of the issues that we have encountered this summer.

5. What was the most difficult part of growing in the new Champion greens?

Time was certainly the biggest challenge.  When I began mid-June we had no grass on the greens, no equipment to prepare a surface onto which we could sprig, no control of a few of our greens’ irrigation heads, and no employees to help get us where we needed to be by mid-July.

[I was stunned by the quality of the greens in early October 2018. They were in absolutely fantastic condition. Mat and the staff did an incredible job with this.]

Thanks to several kind hearted superintendents, one of the best mechanics that I know who somehow pieced together what was left of the equipment left behind by previous owners, and a handful of individuals that had no golf experience but were up for a few 14+ hour days while restoring this property, we managed to have greens somewhat put together when the sprigs rolled into town.

6. Aside from being 10-12 inches tall, how healthy was the fairway turf when you took over?

The turf itself was relatively healthy.  There was a fair amount of spring dead spot and a good amount of weeds but the grass plants that were here were tall, green, and happy.

7. Willie Downs told me that the drainage system was damaged. How much work is required for that to be fully functional?

The drainage system is certainly one of our big issues and sadly one that many recent golfers will remember.  We are in the process of correcting 100+ drain breaks that have caused sink holes throughout our fairways and rough.

[In the previous video, large patches of high weeds, 3-4 feet tall in some cases, could be seen in the fairways. These weeds were growing in/around the malfunctioning drainage pipes. I saw one of the pipes that had been partially unearthed, one of the reasons for the malfunctions was that originally the pipes were laid down and simply bent upwards to the drain grate. This caused failures in the pipes over the years. As I was told, when they're rebuilt, it will be done with elbow joints in the ground rather than bending the pipe.]

8. I noticed some patches of zoysia encroachment in the fairways. What are your plans for that?

Both zoysia and bermudagrass have proven to provide outstanding playing surfaces for some of golf’s biggest events.  At this point, we plan to maintain both grasses in our fairways, understanding that in any given microclimate one grass will prove itself better suited for healthy growth.  Achieving full coverage of quality playing surfaces is our top priority.

9. Where would you like to see the course, in terms of turf health and maintenance, in one year?

I see the course in great playing condition by the time that we open in the spring of 2019 and continuously improving.  If the guys of this maintenance team continue to put forth the effort and excitement that they have shown, this place will truly be something special.

Thanks for participating Mat. When I played the course 8 years ago, I found it to be an incredible place even then. That was with some already degraded conditions. With the money being spent to improve the course and the fantastic staff in place, I think this course will take a place among the elite courses in Virginia.
at 12:38 AM No comments: